David Sedaris is an American writer, comedian, humourist and radio contributor of Greek descent on his father's side. He was born in 1956 in New York state but grew up in North Carolina. His first reading on National Public Radio in 1992, when he read "SantaLand Diaries" about a supposed experience working as an elf in Macy's store at Christmas caught the public attention and led to him writing his first book, "Barrel Fever," a collection of essays and short stories, in 1994. He has since published Naked (1997), Holidays on Ice (1997), Me Talk Pretty One Day (2000), Dress Your Family in Corduroy and Denim (2004), and When You Are Engulfed in Flames (2008), all short story collections. His stories are very often autobiographical and self-deprecating, and cover things such as his Greek heritage, his middle-class upbringing, and his travelsin France and London. His two latest short story collections are, "Squirrel Seeks Chipmunk: A Modest Bestiary" (2010) and "Let's Explore Diabetes with Owls," (2013). He currently lives in West Sussex in England. 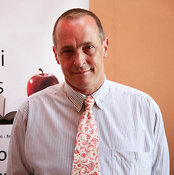