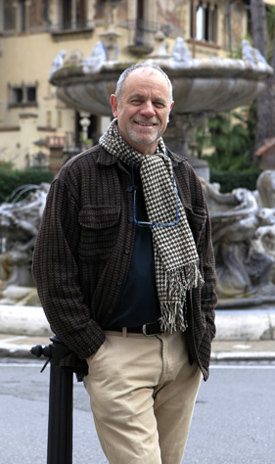 I started my freelance professional photographic career in the mid eighties in London. In those days I used to photograph mainly still life and architecture for ad agencies, magazines and design groups, and also architects.

Times have changed and I now live in Rome in Italy. Nowadays I find most of my work takes me away from the studio out into the city or beyond. I shoot a variety of people on location, including corporate portraits, reportage and city scapes, interiors and travel. I also shoot events such as conferences and conventions, and press work, covering cinema and culture, politics, the Six Nations Rugby at the Stadio Olimpico and other sports, and from demonstrations to fashion shows.

I have photographed a Vespa scooter in the Trevi Fountain, and been left alone to my own devises shooting priceless Bernini statues and other artworks in the Borghese Gallery in Rome.

Some of the advertising agencies and clients I have worked with between Milan and Rome include:

My photos have appeared in publications the U.K. and internationally including The Times and Sunday Times, Daily Telegraph, The Guardian, Italy and Italia magazines in the UK, World Traveller Magazine, Marie Claire of India, Beef! magazine, Hamburg; and Panorama, La Repubblica, L'Unità and the Corriera della Sera in Italy.

Images of mine have received recognition in the following competitions and awards.